Banks Ram-Air Intake Systems are tested and proven. They start out as CAD software prototypes and are put through flow simulations. After a hardware prototype is made, it's tested on a flowbench. Then it's tested on the vehicle. And finally, Banks' density-tests the Ram-Air against stock and many competitors.

Thanks to its enclosed cold-air housing, huge inlet, giant dome-shaped filter and streamlined design, Banks Ram-Air Intake maximizes the flow of cool, dense air to the engine for greater power and fuel economy. It flows 47% better than stock. And delivers greater air density to the turbo's inlet than the stock system and every competitor tested! Add on the optional Super-Scoop, and the results are even better!

It's all about density.

An aftermarket exclusive: with 5" bellows, Banks Ram-Air accommodates engine movement, which protects the components and extends service life. What's more, Ram-Air is designed to not cause fault or error codes. 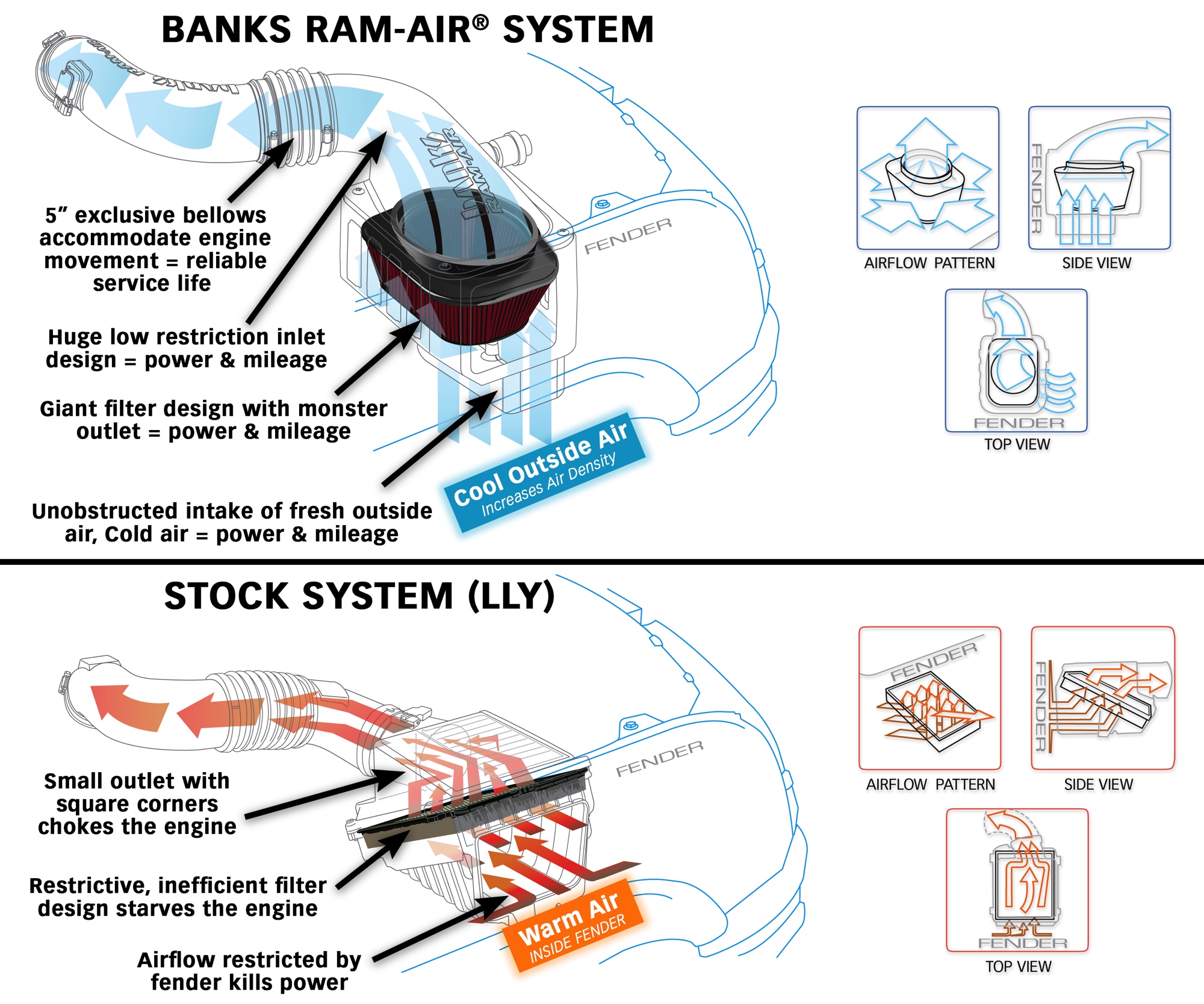 Note: This illustration shows a stock LLY intake so yours may not be identical.

All 8 Intakes Perform worse than Banks!

7 out of 8 “cold air” systems actually increase temperatures above stock levels at the turbo inlet!

It’s good to be dense, all right. Check out our density ad for an informative look at intake airflow, air temperature and air density, and how they all come together in the Banks Ram-Air Intake. Bankspower.com/density ad

We measured each intake’s effect on air density at the turbo compressor inlet. Intake temperatures will generally be higher than ambient conditions, but the more the system can duct cool air to the filter and preserve the cool temperature as the air is ducted to the turbo, the higher the air density will be. In addition, there will commonly be a pressure drop as air travels through the filter and the ducting due to any restriction that is introduced. If the design of the system can minimize the restriction and the pressure loss, air density will be preserved.

A 2006 Chevrolet 2500HD, 4 wheel drive, with a crew cab, six foot bed and automatic transmission was used as the test vehicle. A data acquisition system was used to measure vehicle speed via GPS, along with multiple temperature thermistors and extremely accurate pressure transducers. The total vehicle weight was approximately 19,000 lbs. Tests were run in 2WD.

Testing was conducted on a moderate hill on the northbound CA-57 in the city of Pomona. Speed was maintained at 45 MPH until the vehicle was adjacent to a pre-determined start point on the road. At that point, the accelerator was fully depressed and the vehicle was allowed to accelerate while climbing the hill. Test data was observed at the same vehicle speed in all cases, with the engine at 2800 RPM, the point of peak engine power. This data point occurred between 60 and 90 seconds into the run—sufficient time to allow the engine to reach a stabilized operating condition.

Vehicle Speed, Engine RPM and Accelerator Pedal Position were logged to determine the load conditions and speeds. Temperature was measured using thermistors for increased accuracy. They were mounted to measure ambient temperature as well as temperatures at the filter and compressor inlets. Pressure transducers were used to measure pressure in the same locations. The air intake system effect on air density was evaluated by comparing the temperature and pressure of the ambient air condition with the temperature and pressure of the air at the turbo compressor inlet.

Why on earth would anyone pay money for a product that kills power and mileage? It’s all about density — and Banks Ram-Air delivers.

NEW FILTER OPTIONS! Choose from the traditional red, oiled filter or the all-new black, dry filter. Plus, you can even get an extra layer of filtration protection by adding a pre-filter to your order. 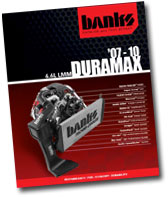 Here's the TEST REPORT for your vehicle!
View it right now online »